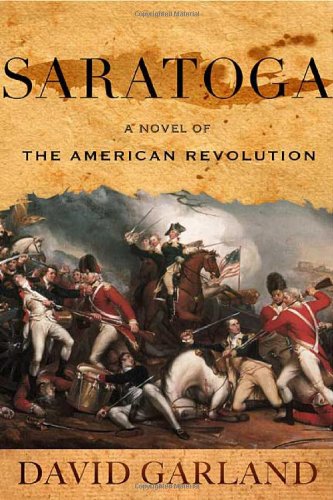 Saratoga: A Novel of the American Revolution

Capt. James Skoyles marches back into the Hudson Valley, led by Gen. John Burgoyne, and prepares for round two of the Revolutionary War, as this first book in a series from the pseudonymous Garland begins. Garland has done his homework when it comes to the troop movements and maneuvers—Skoyles is attached to the 24th Foot of the British Army—and does not shy away from gory scenes of floggings and scalpings, and his commanders give grand speeches in the British and American camps while eschewing proper battlefield behavior and sipping brandy. Aside from appearances by Ezekial Proudfoot, an American engraver who draws pictures of the battles to stir up American commitment to the war effort, that's the bulk of the period flavor Garland provides. Instead, romance between Skoyles and the beautiful (but betrothed) Elizabeth Rainham and a stock cast that includes evil Major Featherstone (Elizabeth's fiancé) and gentle Private McKillop ("who remained resolutely cheerful even though he had a leg amputated....") provide intrigue and comic relief. Skoyles, annoyed at his commanders and as smitten with colonies as with Elizabeth, wavers, and the climactic battle is mounted. The intra-unit and military-civilian politics are well done, but the whole is strictly for military fiction aficionados.