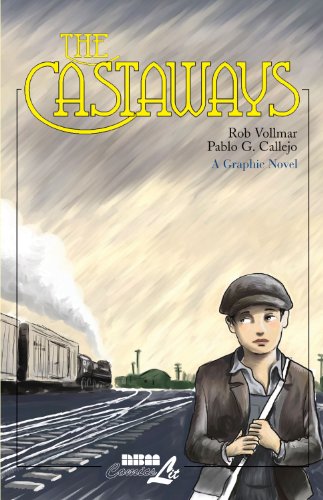 An attractive expanded and color-enhanced version of the Depression era story that was nominated for an Eisner award as Best Single Issue/One Shot in 2002. Afraid that he's just a burden on his family, 13-year-old Tucker Freeman lets himself be driven away from home and jumps on a freight train heading west. His inexperience makes him vulnerable to all the angry, desperate people looking for any way they can survive during America's economic collapse, but fortunately he's taken under the wing of Elijah Hopkins, an elderly colored man who introduces him to the cooperative hobo subculture. In the company of other social castoffs, Tucker discovers that he does have choices of how to live and where to go. Vollmer's script, based on family reminiscences, rings true; his dialogue has the vocabulary and the rhythms of real people talking, and the characters behave in the sometimes mean but sometimes generous way that real people do. Without glamorizing the characters or their surroundings, Callejo's art creates a solid setting in which Tucker's experience can reveal squalor or grace. Like , this story doesn't pretend to solve the whole society's problems, but it does show a small, convincing human victory.