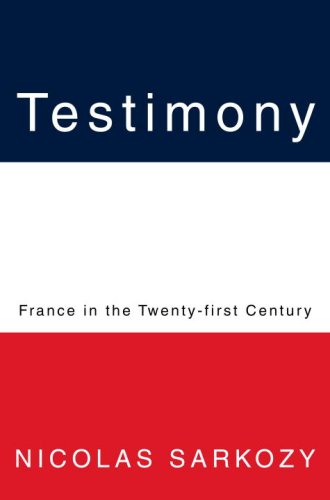 Testimony: France in the Twenty-First Century

Much of this newly translated political manifesto by France's Gaullist presidential front-runner won't come across clearly to Americans—especially the author's cryptic allusions to his marital difficulties, his murky feuds with other French politicians, and to unnamed "plotters and schemers in their smoke-filled rooms." But given Sarkozy's penchant for "American"-style rhetoric, much else will seem familiar: his celebration of individual initiative, hard work and risk-taking entrepreneurship; his insistence that France dynamite its allegedly sclerotic welfare state and embrace a competitive global economy; his tough-on-crime stance and his tearful elegies for children murdered by sex offenders. Sarkozy decries France's 35-hour workweek, high minimum wage and lavish dole, and fires a fusillade of small-bore, often vague proposals to improve the tax and judicial systems, education, the constitution, the civil service and immigration policy. For all his echoing of Bills Clinton and O'Reilly (with a touch of Gallic grandiosity), this leader on the French right is still left of the American consensus; he opposes the death penalty and champions affirmative action, and even his reformed welfare state would strike many Americans as socialistic. As bracing—or unsettling—as Sarkozy may sound to the French, in English he is rather tepid.