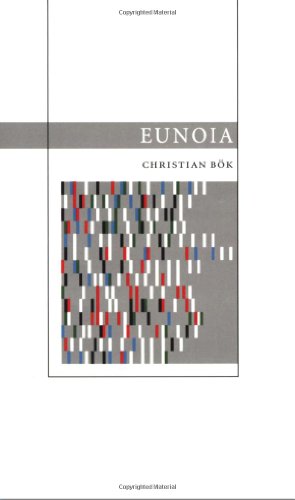 "Writing is inhibiting. Sighing, I sit, scribbling in ink this pidgin script. I sing with nihilistic witticism, disciplining signs with trifling gimmicks—impish hijinks which highlight stick sigils. Isn't it glib? Isn't it chic?" Besides being glib and chic, Bök's new book strikes one with the force of being the most incredible literary curio: each of its chapters is allowed to use only one vowel—outgunning even Georges Perec's famed , which simply omits the letter "e." Apparently seven years in the making, , the shortest word in the English language to employ all the vowels (it means "beautiful thinking"), also employs other, more mundane constraints on paragraph length (all are 12 lines long) and what must be mentioned (the act of writing, nautical travel, energetic eating). This hyper-mechanization of the writer's craft sets the stage for a welter of eccentric, yet universally appealing, tours-de-force, such as Chapter E's retelling of the from the viewpoint of Helen: "Whenever Helen seeks these perverse excesses, her regretted deeds depress her; hence, Helen beseeches Ceres (the blessed Demeter): 'let sweet Lethe bless me, lest these recent events be rememberd'—then the empress feeds herself fermented hempseed, her preferred nepenthe." In the "u" chapter, "Dutch smut churns up blushful succubus lusts," and Ubu and Lulu burp, hump and bump for five delirious pages, exhausting, in the meantime, the entire range of English words that only contain the vowel. 's reductorial neurosis as euphonically zestful contrivance turns formidable stunts to imp's play. That is, this terrific book makes sense on its own terms.