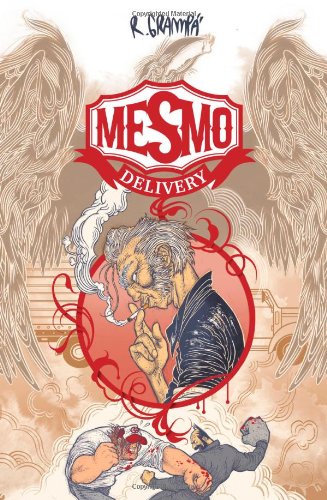 Brazilian cartoonist Grampá has been the subject of considerable buzz on the strength of a few anthology appearances, but this is his first full-length comics project of his own. The story (with English dialogue by Ivan Brandon) is relatively negligible—it's a sort of hyperviolent, supernatural-tinged trucking Western, in which a milk-drinking ex-boxer and an aging Elvis impersonator pull into town in their 24-foot rig, stroll into a saloon and tick off the locals. Mayhem ensues and continues until blood flows in the streets and the survivors are picking teeth out of their fists. The book showcases the spectacular panache of Grampá's Grand Guignol linework—he draws with obsessive detail and tall-tale exaggerations, and everything from bodies to sound effects looms toward the reader as if seen through a fisheye lens. His artwork isn't for the weak of heart or stomach, but it's built around a series of indelible images: a torso so hypertrophied it crowds everything else out of the panel, a series of panels that zoom in through a screaming mouth as the head it belongs to is severed, a crotchety old man with muttonchop sideburns licking the blood off one of his curved blades.