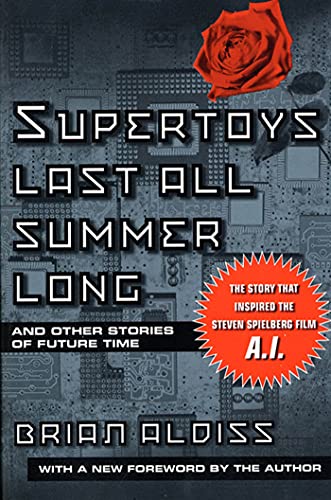 SUPERTOYS LAST ALL SUMMER LONG: And Other Stories of Future Time

The title story of this collection—a 1969 vignette about a boy-robot who wants to be real—captured the imagination of Stanley Kubrick, though the acclaimed director never managed to expand it into a feature-length motion picture. Two additional vignettes by SF Grand Master Aldiss 30 years later—"Supertoys in Other Seasons" and "Supertoys When Winter Comes"—flesh out something of a story line, which has become the basis of Steven Spielberg's probable summer blockbuster, . Many of the other pieces here also remain at the vignette level, merely presenting ideas rather than creating stories. "Apogee Again" and "Becoming the Full Butterfly" offer settings where sex becomes a metaphor for survival. "Beef," "A Matter of Mathematics" and "Cognitive Ability and the Light Bulb," like the speechified "III," extrapolate the eventual failure of humanity's attempts to grow and expand to other worlds without harming them. "Marvells of Utopia," "The Pause Button" and the Socratic dialogue of "A Whiter Mars" all examine different versions of Utopia, each a society that has sacrificed some basic human value in order to achieve qualified perfection. The search for a better life through time travel likewise reveals predictable results in "The Old Mythology," while "Headless" delivers heavy-handed points on crime and punishment. This collection is a mixed bag of scenes and cold, distantly told stories showcasing the author's biting sarcasm and apparent lack of hope for humanity's future.