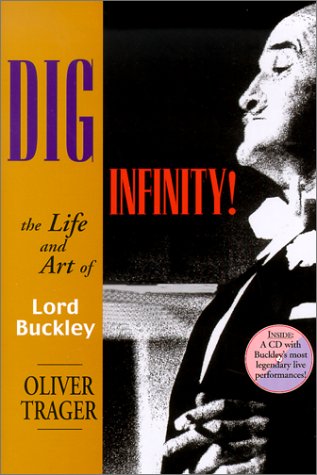 DIG INFINITY!: The Life and Art of Lord Buckley

Entering show business in medicine shows, speakeasies and tent shows of the 1920s, Lord Richard Buckley (1906–1960) became an emcee for 1930s walkathons and dance marathons, toured in USO shows, and made early 1950s appearances on Ed Sullivan's TV show and Steve Allen's When the first Buckley records were released, listeners encountered the monologues of a gifted storyteller—a white Californian who moved with the regal bearing of a British aristocrat yet spoke like a black preacher rapping a jive jargon. Beyond his famous Bible interpretations, Buckley wailed on Shakespeare ("Hipsters, flipsters and finger-popping daddies, knock me your lobes...") and historical figures. Interest in this influential performer is certain to escalate with the publication of this huge compendium by Trager, author of and co-host of an annual Buckley radio show. Trager has assembled a prismatic portrait by combining oral history, articles, reviews, liner notes, obituaries, critiques and biographical bits with Buckley's own monologues, still classic creations. Outstanding is a chapter analyzing Buckley's influence on the young Bob Dylan. The lengthy list of interview subjects includes hip humorists, actors, writers, singers, musicians and composers such as David Amram, who commented, "I think what Lord Buckley did was to see the poetry and genius and the majesty and the humor and the pathos of the African-American ethos and he used it combining Shakespeare and the Bible." Equally mesmerizing and entertaining is this massive assemblage, certain to be embraced by both longtime Buckley buffs and newcomers to His Lordship. Accompanying CD compilation unheard by .